The archivist is on top of things for a change, and ready to switch out poems with alacrity. During this past month, I read some escapist literature, a mystery novel by Deborah Crombie called Dreaming of the Bones. The subject was the suicide of a woman poet of the Sixties, which turned out to actually be murder. No surprise there, plot-wise, but the poet character was obsessed with the life and poetry of WWI era poet Rupert Brooke. Each chapter heading had a quote from one of his poems, and thus I read more Rupert Brooke last month than I'd done in twenty years.

I was a bit surprised at how good he was, despite being obviously very young--and how good he might have become if he'd lived longer and lost some of the melodrama of youthful exuberance. Anyway, here is a bio page of his short but eventful life at Poets.org, for those interested.

The selection I've chosen for this month, by Rupert Brooke of course, is

Sonnet: I said splendidly I loved you; it's not true.

You'll find it here, on the Off the Shelf page, which now allows comments.

And here for final perusal before hitting the archives is last month's verse, Calypso's Island, by Archibald MacLeish: 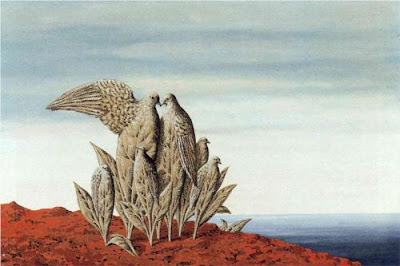 Calypso's Island
by Archibald MacLeish
I know very well, goddess, she is not beautiful
As you are: could not be. She is a woman,
Mortal, subject to the chances: duty of
Childbed, sorrow that changes cheeks, the tomb--
For unlike you she will grow gray, grow older,
Gray and older, sleep in that small room.
She is not beautiful as you, O golden!
You are immortal and will never change
And can make me immortal also, fold
Your garment round me, make me whole and strange
As those who live forever, not the while
That we live, keep me from those dogging dangers--
Ships and the wars--in this green, far-off island,
Silent of all but sea's eternal sound
Or sea-pine's when the lull of surf is silent.
Goddess, I know how excellent this ground,
What charmed contentment of the removed heart
The bees make in the lavender where pounding
Surf sounds far off and the bird that darts
Darts through its own eternity of light,
Motionless in motion, and the startled
Hare is startled into stone, the fly
Forever golden in the flickering glance
Of leafy sunlight that still holds it. I
Know you, goddess, and your caves that answer
Ocean's confused voices with a voice:
Your poplars where the storms are turned to dances;
Arms where the heart is turned. You give the choice
To hold forever what forever passes,
To hide from what will pass, forever. Moist,
Moist are your well-stones, goddess, cool your grasses!
And she--she is a woman with that fault
Of change that will be death in her at last!
Nevertheless I long for the cold, salt,
Restless, contending sea and for the island

Where the grass dies and the seasons alter:
Where that one wears the sunlight for a while.

Image: Island of Treasures, by Rene Magrite, 1942
All copyright belongs to the copyright holders.
via wikipaintings.org
Posted by hedgewitch at 11:36 AM