What is said here
is true in the moment
if in itself
the moment is true.
Here before bewitchment and betrayal,
before the spell winds out
before the mind-clot bursts,
the indifferent bile seeps scouring
beyond the skein
of loops and traps; said quick
before our pages become
blackened stalks
pulled naked
in the wind. 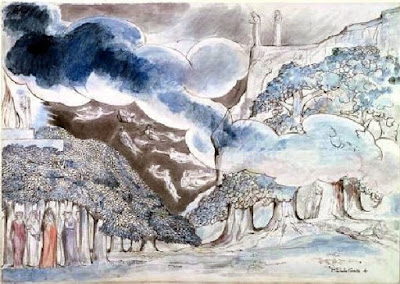 Kerry's plus this time is to draw on either the paintings of Rossetti or the writings of Dante; I have used Rossetti's Mnemosyne, the mother of the muses, the goddess of memory,  from whom Hesiod said 'kings and poets receive their powers of authoritative speech...'  You may remember from other process notes that she possesses a pool in the underworld, which when the dead drink from it, restores every memory of past lives, being the opposite of Lethe where all such baggage is allowed to be forgotten.
Dante contributes the title, and the poets conversing in a limboish Hell..

Posted by hedgewitch at 7:18 AM