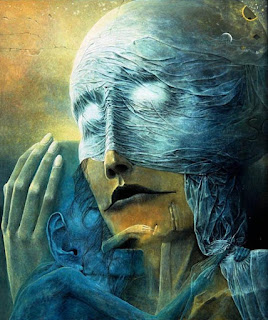 Fighting for air
droplets of mist
rich lipids of coagulated moonlight
wax smooth cheeks furrowed against the
assassin blank stare of the moon
in a night given over
to grief's predator jackboots
streaked marks on brainwork pavers
a night black as Lamia's eyes
when no good can be done no thing
left whole no ghost laid
no purpose served
a night when
the dream will have its way
for nightmare devours down
to what it must have
nothing left but to wait
weighting hours in wet clothes
for the drowning
man half rescued, blue lips still dripping
the clean chloride kisses
of commodious death. 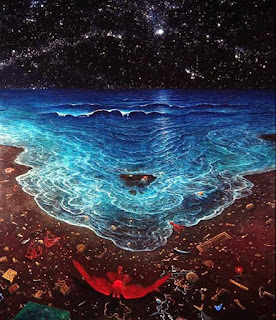 Process note:" In ancient Greek mythology, Lamia ...was a beautiful queen of Libya who became a child-eating daemon..a mistress of the god Zeus, causing Zeus' jealous wife, Hera, to kill all of Lamia's children and transform her into a monster that hunts and devours the children of others...In later stories, Lamia was cursed with the inability to close her eyes [and]Zeus then gave her the ability to remove [them]. ...[some] versions state [this] ability...came with the gift of prophecy."~wikipedia

Grace (everyday amazing) introduces us to the work of the 20th Century Romanian poet and translator, Paul Antschel (whose pen name was Celan.) For full details of his remarkable and harrowing biography, see her post at the link above. His poetry is, perhaps inescapably, quite dark--but brilliant. This is only a shadow of that, as our times seem sometimes only a confused shadow of his.

Images, both Untitled, by Zdislav Beksinski
Fair use via wikiart.org