This is a repost from back in January 2011 called  Red Shoes. It took some encouragement from Annell Livingston to convince me I could write a poem about shoes for inclusion in her artbook, The Red Shoes Project, but she ultimately prevailed, and without her this poem would never have been written.  The book will include original poems from many women poets active on the web, and Annell’s lively artwork on the red shoe theme, discussed further after the poem. I reposted it  here as her work on the project neared completion.

The book is now available from LuLu.com as The Red Shoes Artist Book Project, by annell livingston

I’m very grateful to have been asked to contribute, and feel lucky to be included with the many talented people involved. 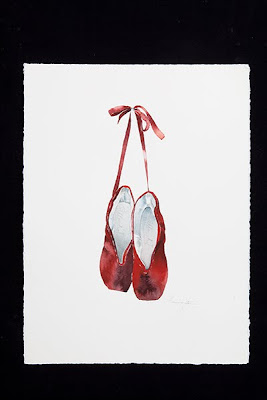 She danced through the night. Her shoes were red.
She rang her bell of tulle and ribbons, dress of dreams.
The master cued her moves and sewed her seams
and made her body over like a doll’s without a head.

He choreographed her pas de deux, a masque of the dead.
She must be only air, her bones hollow as moonbeams.
She danced through the night. Her shoes were red,
stiff her bell of tulle and ribbons, dress of dreams,

Image by Annell Livingston,
Somethings I think About


Here is a bit more information on the project in Annell's words:

Sometimes the stories that are told by book projects are secrets and go beyond words, but books are inherently optimistic; they express the belief that communication will be received later and elsewhere....at sometime, and somewhere they will be read.

The red shoes are a symbol of creativity for women and our legacy.  It is this legacy that The Red Shoes artists book project addresses.

I have asked sixteen artists to join me in The Red Shoe project.  The writings of these women are diverse in language, style, approach and form.  They each seem to be remaking, renewing, renaming, re- experiencing and recasting old ideas about the Red Shoes, and the meaning in their lives.

I conceived the idea of a Red Shoe artist book project, while reading the Madwoman in the Attic, by Sandra M. Gilbert and Susan Gubar.  They explain that the women of the nineteenth- century had what was called “anxiety of authorship,”  --a fear that she could not create, and the act of creating would isolate or destroy her.  The symbol of the red shoes is often used in fairly tales as the symbol for the creativity of women, i.e. Snow White, The Wizard of OZ, Cinderella and others."

If you'd like to read more of the poems in this project, you can visit Annell's website,
Somethings I think About, where she has posted some of the other contributions as well as more of her own  artwork.

FURTHER COMMENTING DISABLED ON THIS POST DUE TO SPAMBOT ACTIVITY