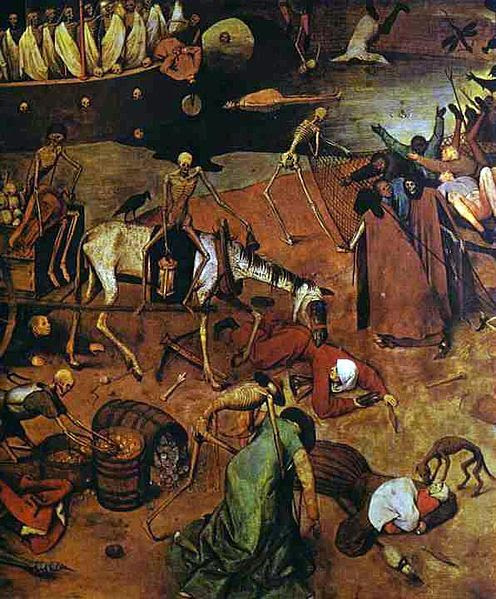 Danse Macabre
It’s quiet in the lab; the outside sky
is Maya blue, impending prophecy ignored
by silent shadows ceaselessly pumping
black caustics into a dead beast’s heart.
Across the world more Hekate’s cauldroned
chaos soup is boiling in a row of cookfires
stretching to a cemeterial horizon, steaming,
roiling up the blistered bones of zombies’ dreams.
Somewhere these butchers' laboratories mate
precise, unholy at a viceblown intersect, palsied
cannibal hand of intent and scalding stew of storm,
centrifugalized to flense a fresh-flayed numen.
Where their crookblade cross comes down
the tiny cells explode, jet beads hot arterial splatter,
maroon buckshot birthing flying screams, monsters,
lost causes in the burning dead of shuttered night.
The beast jumps up, the blood of its tormentors
silversweet in a short unlife that mocks the gods;
cracking tarmack, the plague cart calls at every house,
as the briefly interrupted dance of death resumes.
August, 2011

Todays host for the prompt is the inimitable Brian Miller, asking us to see what's really there, if we can stand it.

Posted by hedgewitch at 2:15 PM