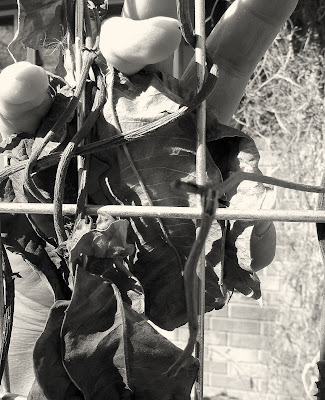 Oxygen Vine Dreamscape
a voice was singing
Oxygen vine
sweet life of mine
o how you twine
oxygen vine
You began to turn me leaflike
browsing me in slack moments,
a subscription of yours, a pastime.
I saw a skewed wall in a lunatic jungle,
undeciphered petroglyphs
scrawled over by flaming flower graffiti
dark hands of roots, celladon vineshadows,
utterly unreadable
a nonsense song
Oxygen vine
trace me a line
o how you twine
oxygen vine
I was deaf from the reverberations
of collision when you told me
I was a wall against whose
resistance you built your self, but
I was only flesh behind a  wall
etched with the sigils of an unknown cabal,
its vines and shadows
become my skin
in the deep night
Oxygen vine
black columbine
o how you twine
oxygen vine
Love is a cannibal you explained.
His first goal is to kill and eat the other
then make tuneful bells from the bones.
Just so you grew your tensile intoxicant ribbons in me
so hungry and alive, tickling, strangling
composting accommodating flesh till I was friable ooze
root-fractured, absorbed into your sucking shoots
flensed down to my skull for a drum
sweet notes pulsing
Oxygen vine
razors in wine
o how you twine
oxygen vine
I was wined and twined
cut so quickly
I never knew when my smile lost its lips.
You pierced and numbed me
bubbled my blood out with your own
beads of verdant air, an antagonism of life support
careless of  the red drops’ splash
or my cyanic throat
rattling and humming
Oxygen vine
ventilator’s whine
o how you twine
oxygen vine
Autumn brings a bonfire.
Dry leaves and twigs burn tinder fast
thorns and flowers flaring farewell
in a temperature that crackles,
twining flames fed hotter
by an inrush of escaping air exploding
black under the lids into
smoke blown like seeds on the wind
vanishing
Oxygen vine
darkness define
your ashen design
into silence
March 2011
Posted October, 2011 for   Poetics   at  dVerse Poets Pub
Claudia is in charge of the prompt today, titled Call and Response, and has asked for a poem of two voices speaking. This is one which I wrote to have three separate threads, or voices, going on, the single lines make one poem, the non-italicized 'song' another, and the italicized main body the third. Each can be read individually, and each either answers or supports the other. I've used a little color to make it easier to see for the prompt.
Hope this meets the requirements as I had no luck with a new effort today.

(Originally posted for One Shot Wednesday at the inimitable OneStopPoetry)
Photo: Trellised Hand, by joy ann jones, march, 2011
Posted by hedgewitch at 3:46 PM