The archivist has been sorely distracted lately, dear readers. Between holidays, health and hectic moments of every day minutia, I've been writing less, and reading less of what I need to read, and more of what is pure indulgence. I've also had to limit my hours on the computer. All this by way of excuse, of course, for not changing out the Off The Shelf selection in months.

For February, I turn to a poet who's little read these days, but a favorite of mine, Archibald MacLeish. I don't suppose many remember him, though he won three Pulitzer Prizes, an Academy Award, and was also the Librarian of Congress and an assistant Secretary of State. Fame, particularly for poets, is a pretty flimsy thing, I think

MacLeish was a Modernist poet, essayist, screenwriter and playwright, heavily influenced by Pound and Eliot, and sometimes seems like an echo, but don't we all (echo our influences, that is)--his own voice is there underneath, and to me he has an easy, comfortable way with words.  I don't know much more about him than that, but I've always liked his poetry.  Poets.org has a short bio of him here and the Poetry Foundation has a much longer one, if interested.

The poem I've chosen is Calypso's Island, and you'll find it on the Off The Shelf   page, which now allows comments.

The former selection, Anecdote of the Jar, by Wallace Stevens, is below for a final perusal: 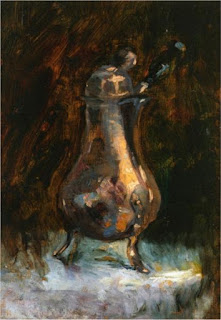 Anecdote of the Jar

I placed a jar in Tennessee,
And round it was, upon a hill.
It made the slovenly wilderness
Surround that hill.

The wilderness rose up to it,
And sprawled around, no longer wild.
The jar was round upon the ground
And tall and of a port in air.

It took dominion everywhere.
The jar was gray and bare.
It did not give of bird or bush,
Like nothing else in Tennessee.
~by Wallace Stevens

Email ThisBlogThis!Share to TwitterShare to FacebookShare to Pinterest
Labels: 2013, macleish, off the shelf archive, wallace stevens