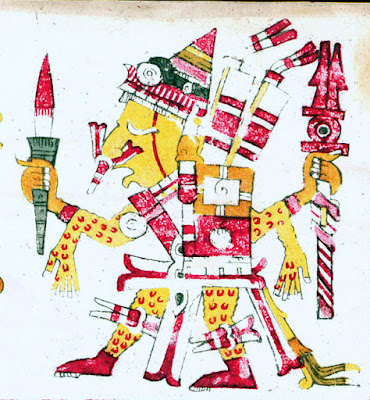 Red Smoking Mirror
I.
That was a hell of a poem, that one.
Some captive of war, some harem
woman, spilled her guts to you
flayed away all her hide
to bare nerve.
You
picked it up and wore it
just like mine, our wrists flapping,
bloody faces making masks
for yours, cut lips singing
all your
butcher's songs.
II.
It's plain I said, I need to make a pyre
of all these undead fears and burn them out.
Oh no, you said, there's never enough fire.
Make garments of your fears' flayed skins and shout,
for loving's a red coal beneath your feet
and being loved a poem you can't complete.
But I turned off that voodoo child advice
when I saw you line them up like bowling pins
for your mumbled brujeria to hypnotize.
I left; now all my words are my own sins,
spells of blood are broken for a price,
with ravensong in dreams and peace the prize.
October 2021
posted for Poetics
at dVerse Poets
brujeria: (Spanish) witchcraft, sorcery, black magic

Process Note:" In Aztec mythology and religion, Xipe Totec [pictured at top] or ... Xipetotec  ("Our Lord the Flayed One") was a life-death-rebirth deity..[the god] was also known by various other names, including Tlatlauhca, Tlatlauhqui [or]Tezcatlipoca ("Red Smoking Mirror")... [he] is represented wearing flayed human skin, usually with the flayed skin of the hands falling loose from the wrists...Various methods of human sacrifice were used to honour this god. The flayed skins were often taken from sacrificial victims who had their hearts cut out..."~wikipedia

Image:Xipe Totec as depicted in the Codex Borgia, shown holding a bloody weapon and wearing flayed human skin as a suit.  via wikipedia    Fair Use