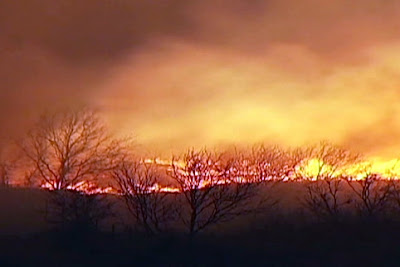 Dry Spell
The drought is a dead mother, all silence and negation.
It breathes the void and makes inaction action.
It gathers up possibilities and reduces them by fraction
to a still cipher that sucks the multiples from creation.
The drought owns nothing but the dead empty and a name.
As green falters and begins to change its mind,
the bright is bleached out grey, limping down a stony wind.
The sky is stripped. There’s no giving left to find,
except the gift of wind not breath, just scorch, the whip of flame.
Serial and sere, Ceres surrenders, hushes and renders
her variegated voice silent that sought to sew the cloud
to earth in her soft singing seaming, terrestrial to celestial.
Instead the steel wind has dry lightning on its fenders;
it drives the wildfire down the highway, smoke impenetrable
and all the still or wavering things are burned up in that shroud.
As I’m burning through this empty coughing dream
of nothing where your song once sewed the seam.
April 2011