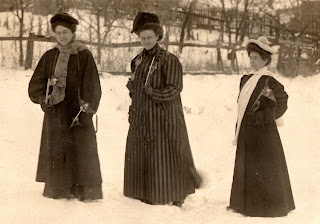 Grey Geese
The long forgotten party
spilled out on the snow
away from the day's work,
away from the houses,
and every winter journey
started there, where three women walked.
The first day was for cooking,
and the cleaning up after cooking.
The second day was for eating,
and the cleaning up after eating,
but the third belonged to the women
and they chose the frozen pond.
Just the three of them, leaving
behind the children tired but playing,
the menfolk fed full and playing
with whiskey and cards in the back room.
They came to skate
but they meant to fly.
One was practical; she would always work
hard on the ice, skirts heavy, soon damp,
using her legs, pulling herself along
brow furrowed and bent to the purpose,
to make herself fly like the geese
who migrate because they have to.
The second woman was preening.
She piled her hair high, picked her fancy hat
and her striped coat to twirl for the watchers.
Full of smiles for the performance,
she skated with show but precision, like
the geese form up in line.
The third woman was caged. She
came to skate out of her world.
She knew the ice was perfect, she knew her circles
and figure eights were the meaning
and pattern in things, like the geese know
how the sky leads away from winter.
The long forgotten party;
three women grey in the distance,
united in a vee    far out on the ice
smiling and flying
away from the work, away from the houses.
Every winter journey started there.
January 2011
Posted for Magpie Tales #49
Photograph by Tess Kincaid, licensed under a Creative Commons Attribution-Noncommercial-No Derivative Works 3.0 United States License
Posted by hedgewitch at 5:05 PM

Email ThisBlogThis!Share to TwitterShare to FacebookShare to Pinterest
Labels: 2011, history is mystery, magpie