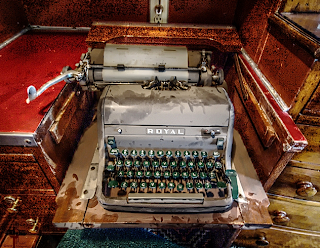 D.C. After Dark
The machine of legend looks like its been on a binge,
listing clackless, hungover and abandoned,
screaming out no more secrets
from its rubbery cylindrical mouth.
It sheds bits of rust with the angry silence
of an old man’s  rheumy tears,
as if in its cancerous steel gut it misses
the caressing fingers of the Famous Beltway Reporter
who once sat here, fueled by tanks of scotch,
fat white cigarettes like obscene stiff worms
leaving their spoor on the scuttling fingertips
pounding the keys with a lover's self-focused delight
crescendoing release on the last page.
For years he covered D.C. after dark.
The pettifogging mooncalves
shysters and snollygosters who
bottomfeed themselves in the salons and dives
came to him first with their reeking tidbits.
He thrived on the unspoken but finally discovered,
followed his nose through the fug of sex and death,
tapped out the authenticated fables of braggadacio
or translations of confessions barely breathed in the dark
as innocents say their soft prayers to a predicated god.
He was inquisitor and thief to those who loved their sins,
smug counters and recounters of their iniquities,
his job to rob the boxes under their beds of guilt and proofs
of potency, strip the skin off their success
and show the bloody emptiness within.
His old Royal was a mad scientist's laboratory
where all the lies and ramblings, all the body parts
of stories were given a blood test,
filtered through clean white adjectives
administered a shocking phrase
then sealed with tight lines from insider sources
into neat packages to alleviate for some few minutes
the bland boredom of the world.
His choice to make banner headlines
out of ginwhiskered rumors or
lay a blanket of newsprint over cold uncomfortable facts
and put them to bed forever.


Now young blogging upstarts sniff and tap while the
empty wind of words whistles down the internet,
for the Famous Beltway Reporter died
like all the rest, coughing up a lung
and wringing out a bad liver,
clackless, hungover and abandoned,
outlived by his byline, with only the cold
sad truth to sit at his bed and
no one even to inherit his typewriter,
a mumbling derelict forgotten,
passed out under some bridge in the night.

Image: JackAz Photography
Posted by hedgewitch at 9:57 AM

Email ThisBlogThis!Share to TwitterShare to FacebookShare to Pinterest
Labels: D.C. after dark, no intelligent lifeforms, one shoot, one stop poetry