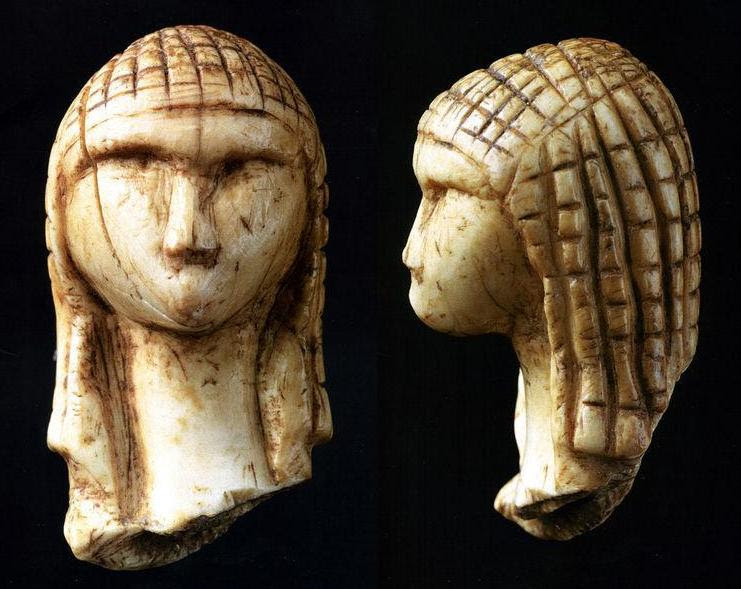 The above figurine was found in a cave in Brassempouy, France in 1892. Known as the Venus of  Brassempouy, she  was carved from mammoth ivory, and  at about 25,000 years old, is one of the earliest known examples of representational art depicting a human face.

Neanderthal venus
walks the proto-forest
very carefully.
She has no lipstick
but her lips will be red
as soon as she eats.
Under the furflare of hair
her occipital bun is tidy.
Her berry eyes glow beneath
an artfully ash darkened
supraorbital ridge.
She has a leopardskin miniskirt
and is goin clubbin.
The ferny air is like a gravy
of wet delicious smells.
Soon, she will invent gravy.
But first she must catch
the makings.
She pauses in a feral crouch
dead in her tracks with a pair of ughs
pulls a fat snail from under a hairy heel.
She has invented h’ors d’oeuvres.
Crunching this gastropodian bonne bouche
between her mandibular prominences,
she scuttles through the underbrush
searching for the ever fragrant
slender and succulent
Cro Magnon man.
February 2011

Image and information on Venus of Brassempouy courtesy wikipedia and wikimedia commons.
The following music clip is totally optional, and other than containing the refrain 'Cave Woman,' and being as non-serious and possibly offensive as the poem, has nothing to do with the subject. Nonetheless, a casual hearing after many years inspired me to write this, and I can't get it out of my head, so I'm including it as it seems to want to hang out with the piece. (This is all your fault, anonymous person who knows who she is.)
Posted by hedgewitch at 7:45 PM