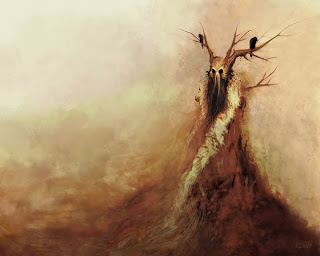 The north wind blows and writes a tale
on night black air, her ink ice-pale,
runes flowing from her pen of snow.
The storm’s her music made to blow
the story singing down the vale.

She cries the one-eyed god’s own tale:
nine days he hung and dared not fail
to learn the things a god must know
who lives in thrall to singing snow.
The north wind blows.

Thought and memory leave no trail
raven high on white winds’ tail,
raven black on books of snow
and helpless as the god below
to change the ending of the tale
the north wind blows.

Posted for OneShotWednesday at the inimitable OneStopPoetry
now more inimitable than ever at their newly revamped site.

This poem is written in the rondel form.

Odin was the ruler of Asgard in Norse mythology, the god associated with wisdom, war, battle and death, as well as  magic, poetry, and  prophecy. He placed one of his eyes in the well beneath the world tree, Yggdrasil and also hung from the tree for nine days in order to learn the wisdom which would give him power in the nine worlds. He had two ravens named Huginn and Muninn(Thought and Memory.) He is destined to be slain by Fenrir, the father of wolves, at Ragnarok.