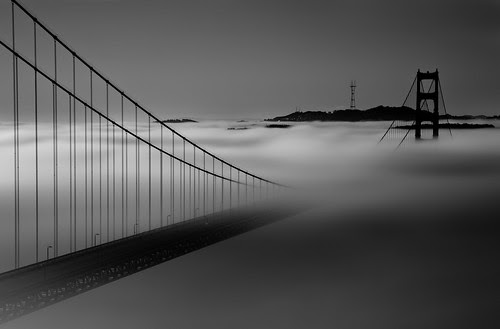 San Francisco Farewell
I.
In fog we breathed the exhaling breath of the earth and sea, and like plants the exhales sustained us. I left you many times before the last time, because our breathing was a joint effort; alone I was gasping too hard to walk far. But life was my ventilator. Now I inhale my own fog. 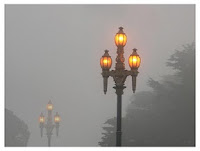 II.
Fog touched the streetlights and made them
Glowing balloons that slowly faded and shrank
As the fog of life compressed and swallowed us
Leaving only a shrunken skin
Without a shape
So many fires to put out
So few rainbows
But the silent clouds
Don’t want to talk about it anymore.
February 2011

Two 55's for the price of one. Such a deal, and only for the G-Man and friends
at Friday Flash 55
a celebration in 55 words
exactly
!
( Last stanza of poem has appeared previously as some of my twitter poetry)
Image: San Francisco Classic Street Lights And Fog, by Chaz Hawley copyright 2007
Posted by hedgewitch at 11:29 PM