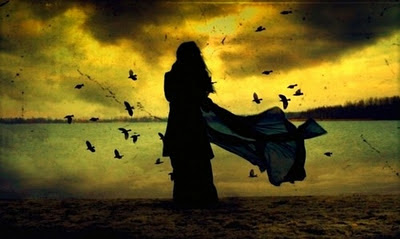 Medea
In her cold bed by the Black Sea's shore
the niece of Circe stirred and felt
her fate, rushing over the wine-red waves.
She slept no more.
The world was still wet in its placental caul
new and vast as the unbordered sky
when she its deep daughter dressed herself
and came to the hall.
The Thief of the Fleece stood proud as the sun
all sweet smiles in a home she must leave
as Eros bid. Her eyes blinked once
and so it was done.
All that tale of love and death
of blood and flight, that was yet to come
took form there then behind her eyes
in a final breath.
She beat for him the killing ox,
the drake's quickened teeth. The dragon itself
she charmed  to sleep so the Fleece rode to Greece
between the oar-locks.
They sailed in a darkness rigid and blue,
flickered by death. She cast her spells,
she learned to kill, to make him king
for a year or two.
She poisoned, scried, and hexed to shore,
bore two strong sons to the Argonaut thief,
knowing he’d leave her as thieves always do
for a princess whore.
The weapon children she drew from their sheath,
the boys he loved and left behind.
Their blood was hers as it dripped from the knife.
Their hair lay soft
as a golden fleece.
originally posted May 2011 at one Stop Poetry
reposted for Friday Picture Prompt at Real Toads
No time this weekend for anything fresh, but I couldn't let that picture pass by and it really reminded me of this poem, rather a quintessential anti-fairy tale, so apologies to anyone who's already read it; I did revise it slightly.
Posted by hedgewitch at 9:41 PM