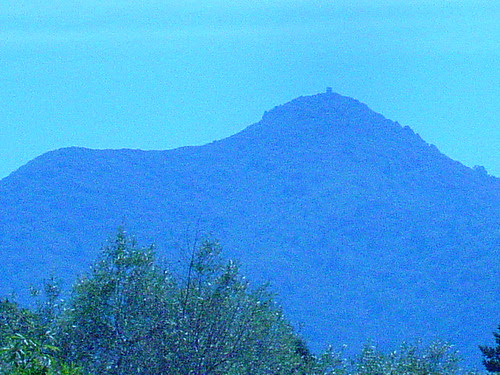 I went walking where the red sunset
was an understatement unshelling
behind the fog and rain, where wind
turned hearts and umbrellas out,
where working girls and
insurance agents were indistinguishable,
past the murmuring parkbench beds, made up in
newspapers sprouting disconsolate beards, eyes sunset red,
kicks drowned behind apricot shadows.

I was still free in the California wine
of air and sea, and the chains to come
could only speak as prophets speak, annoyingly,
Marley's rattling unheard. I climbed the streets
in meadow disguise, up Mt. Tamalpais and back
breathing heat, soaked in birdsong, inhaling a world
untroubled by buddha or his nature, a
perfect thing in my ignorance, content to be filled
with wide emptiness.

"Love is a condition of distance," I said.
"Night sings a lonely death," he replied.
"By the streams of the moon..."

posted for    real toads
Challenge: Destinations and Dialogue
The irrepressible Corey Rowley asks us to write of place, and include some dialogue. The italicized lines at the end of this piece are borrowed from a poem written by my first husband. (Thanks, Lurp, wherever you are.)


Hover mouse for image attribution, or click on pic to go to photographer's flick'r page.